The 32-Page 'Brochure' that convinced Ferguson to sign Michael Owen

I don't usually post links but I couldn't stop laughing after reading through the official 32 page Michael Owen 'brochure' that his agents drew up. It's no secret that I'm a Liverpool fan and I'll even admit to worshiping Owen back in the day(I've got the OWEN 10 shirt to prove it!) 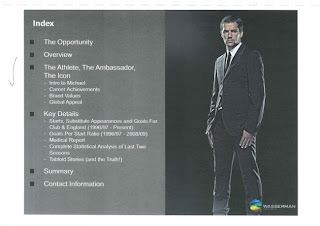 I was a bit too young to witness Fowler in his prime thus making Owen was my first Liverpool 'Hero' and it will hurt to see him wearing the Red of Manchester, but that's life I guess and at least we can make fun of him!

I came across this 32 page brochure and It really had me in stitches! Legend has it that Fergie decided to sign Owen after reading this brochure. It introduces Owen as "The Athlete, The Icon, The Ambassador" then goes on to add(in English, Italian and Spanish) that he is "One of the most feared goalscorers in the world". They also claim that Owen is now "fully fit" after playing in77% of Newcastle United's games last season...try telling that to the Toon supporters!

On Page 5 they go on to state that Mickey should be regarded as highly as the likes of Fernando Torres and Cristiano Ronaldo! "Michael Owen is a global Football star. After David Beckham he is the second best known English player in the world" they claim. Guess they've never heard of Wayne Rooney or Steven Gerrard then? Straws. clutching. at.

The rest of the brochure consist of more ludicrous claims and lots of slides showcasing his 'impeccable' goal scoring record(he scored a whopping 8 League goals last season) and some quotes from Doctors claiming that he is now truly cured from all injuries.